One of the best trips we took last year was a One-day trip to Chikmagalur. Thanks to my brother and sister-in-law who made this outing possible for me and Mike.

Chikmagalur is a town located in the Indian state of Karnataka. My sister-in-law is well-acquainted with the place as she worked there for a few years; So SHE became our special tour-guide for the day.

We began our journey early in the morning at about 5.30am. With a distance of 150 km from Panemangalur (where we were staying), it took us around 2 and a half hours to reach the town. It was one beautiful ride! India is at its prettiest, very early in the morning, when there is less traffic. Driving through the majestic Western Ghats during Sunrise was absolutely breathtaking!

We were quite starving by the time we reached our destination, so we made our way to the Town Canteen. Trust me, we ate one of the best Dosas we’ve ever eaten in our lives (Mike was eager for more!)

After our breakfast, we drove to Mullayanagiri. Located 15 km from Chikmaglur, Mullayanagiri is the highest peak in Karnataka. Standing tall at 6330 ft, it is also one of the highest peaks between the Himalayas and the Nilgiris. After parking the car at the foothills of Mullayanagiri, we began our trek up the hill. Enjoying the panoramic view of the Western Ghats and the beautiful Coffee estates of Chikmaglur, we climbed up further. Talking, regaling one another with our stories, singing and falling (just me!), we trudged on for another hour!

We took breaks in between for fruits and biscuits (Again thanks to my sister-in-law, who’d packed every essential needed for this trip!).

After climbing the steep hill, we came across a muddy road used for vehicles, which was closed for construction purpose (Mullayanagiri can be reached through road as well). Another hour and a half’s trek took us to the foot of a temple. A 600 steps later, we finally reached the Shiva temple, which is at the highest point of Karnataka. (Lord Shiva is called Mullaya around here, and that’s how the hills got the name Mullayanagiri). The views atop were awe-inspiring!!

A couple of hours later we were back where we began.

And then we drove from there to Manikyadhara, where there is a beautiful Waterfalls (As we were too tired by then, we did not walk down to the falls). The view of Bababudangiri hills from there was Impressive!

After resting at Manikyadhara, we visited the Bababudangiri shrine, named after the Sufi saint Baba Budan, who was and is still revered by both Muslims and Hindus.

Then we drove to Belur. Located in Hassan district, Belur is one of the major tourist attractions in Karnataka. The beautiful temple sites of Belur and Halebidu, at the heart of the Hoysala Empire, form the richest sources of Hindu art and sculpture in the country. I was too young to appreciate this amazing wealth of art when I came here the first time, so I’m happy I got another opportunity to visit this place. The geometry and design of the Hoysala Temple architecture and the beautiful carvings left me dazed! 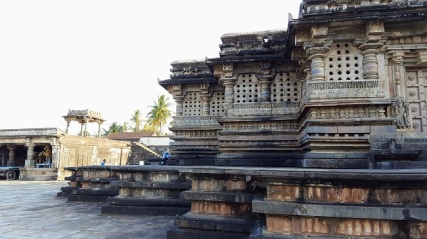 Sadly, we were already short of time and had to head back home, so we skipped visiting the temple of Halebidu. 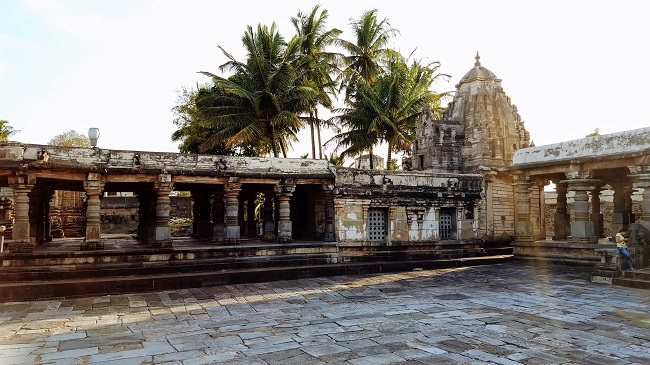 But I must say I had one of the most wonderful experiences in India and I’m proud to come from a country so rich in Heritage and Beauty!