Letter to my kids, Life in India

My littlest isn’t too little anymore! He turned 5 a few days ago and tells me 5 years has been fun so far! He is tall; he’s skinny; he has the biggest, most teeth- and gum-baring smile of all. But don’t be fooled by his stick-like appearance! Thanks to the taekwondo lessons he’s been going to, he has the guts, the strength to take on his big sis, who also goes to the same class, in fights. 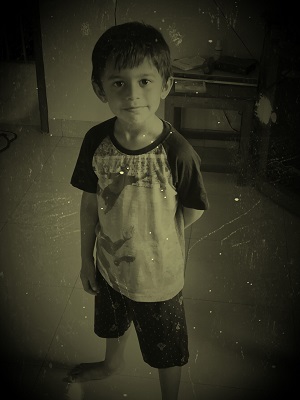 He didn’t cry one bit when he got his shots, which surprised the doc. He said most 5 year olds throw up a ruckus when they are being vaccinated.

But… But… He’s a chicken in some other ways, mind you. He still sleeps with us or his grandparents instead of in his own bed!

His curiosity, the questions he comes up with about the world and beyond, the ways in which his little brain works and the amazing connections it makes between thoughts and ideas, continue to surprise us.

Being the youngest, it’s a wonder that he loves babies so much! It was cute to watch him dote on his little brother, Neel. He would sing lullabies to soothe him and act silly to get him to eat. It was equally a delight to watch the adoration in Neel’s eyes for his ‘big’ brother. 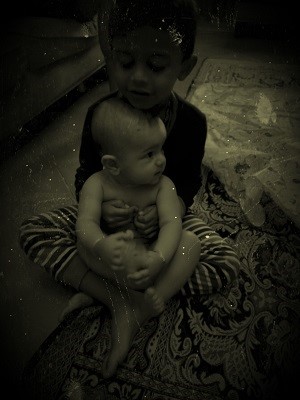 He follows his sister around like a little lamb. And everywhere that Medha goes, the lamb is sure to go!

Madhav knows I’m a crybaby, so anytime a sad scene plays on TV, he’s all eyes on me, ready to console. He can’t bear to see his sister in tears too. He will do anything to make her feel better even though he would have tortured and made her cry in the first place!

His favorite pastime is to make cards for his little cousins. He drops them in our post box and waits for the postman to pick it up and deliver them. And wonders why they don’t write him back!

It feels like only a few days back he began talking, but now he’s quite fluent in Kannada, getting better at English and knows a smattering of Telugu too, although he still babbles. He even gets selected for speeches at school! What?!?

He has God on his speed dial whom he calls upon whenever in need, especially when he’s playing and is determined to win. The sweet thing is he prays for everyone.

Madhav at 5 loves to write, like, All. The. Time and becomes restless when he’s unable to. I wonder who he gets that from! 🙂