Being one of the biggest fans of Sir Arthur Conan Doyle`s fictional detective, Sherlock Holmes, paying a visit to the Reichenbach Falls, was on my travel list for a long time! So when Mike took me, my parents and my mother-in-law there as a surprise on my birthday, my happiness was boundless!!

Reichenbach falls are a series of waterfalls in the Bernese Oberland region of Switzerland.

Now you may wonder what is so special about this place and how it is connected to Sherlock Holmes? This is the location where Sherlock Holmes fights with his arch nemesis, Professor Moriarty at the end of “The Final Problem”, first published in 1893. By the end of the story, Holmes and Moriarty both fall to their deaths down the gorge while locked in mortal combat.

On his vacation in Switzerland, Sir Doyle visited many waterfalls in the region. Apparently Reichenbach falls made the greatest impression on him, that he decided to let his hero die there. 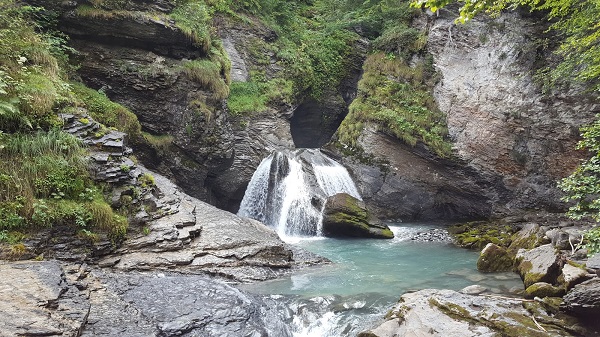 (Conan Doyle meant to stop writing about his famous detective after this short story; but the pressure from fans eventually persuaded him to bring Holmes back in his next stories).

Taking a train is not the best option if you are planning to go on a day trip, as it takes at least 4 hours to get there, and you might need to change 3 trains in between. It is better to drive as it takes fewer hours to reach.

From the parking lot, the falls are made accessible by the Reichenbach fall funicular. 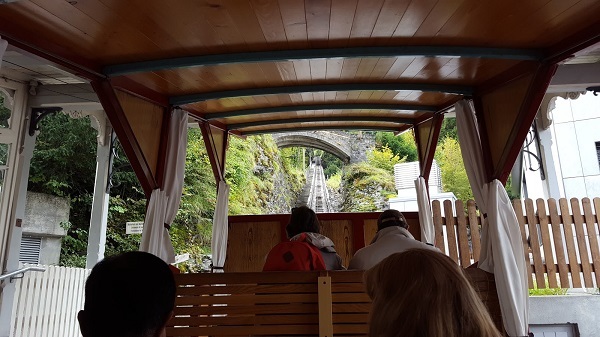 At the station on the top, there is a viewing platform. The actual ledge from which Moriarty fell is on the other side of the falls from the funicular, but we decided not to walk that far. 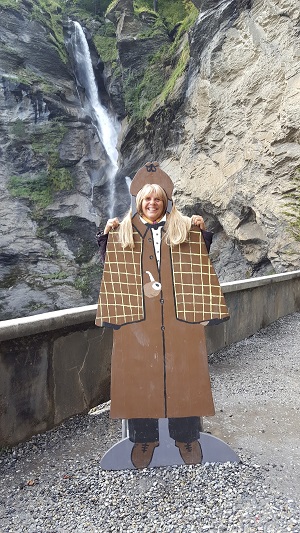 From where we stood, we could see the narrow column of water making its plunge from high above. It wasn’t the “dreadful cauldron of swirling water and seething foam”, as the author describes the “final” moments of his protagonist, but the height of the column and imagining the scene where Sherlock Holmes and Moriarty fall to their “deaths locked in each other’s arms”, sent a chill down my spine!

On our return journey from the hike and the funicular ride, we drove to the small town of Meiringen, to have our lunch at a nice Pizzeria (Thanks to my mom-in-law for this treat!).

After lunch, we walked around the town. We spotted the Sherlock Holmes museum, located at the basement of the Anglican Church near the train station. It is dedicated to Holmes. Though we did not go inside the Museum, we enjoyed the walk around it, which has a life-size statue of the detective. 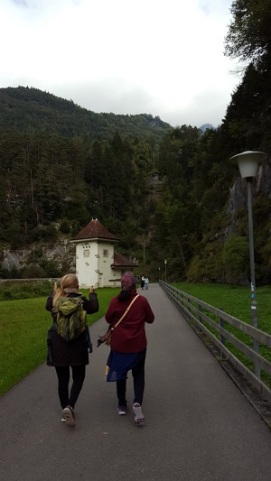 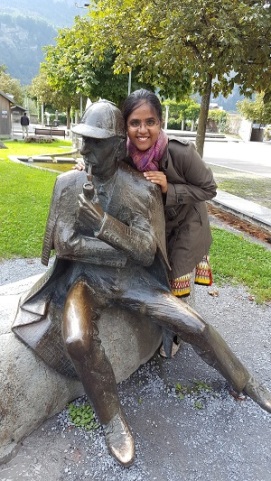 For anyone visiting Meiringen, the Aare gorge (known locally as the Aareschlucht) is not to be missed. The Haslital, one of the large valleys in the central alps, stretches from the Grimsel Pass to the Lake of Brienz. The flat valley floor of the lower Haslital is separated from the upper valley by a transverse rock formation. Over thousands of years, the Aare River eroded a path through this rock formation resulting in a gorge which is 1400 metres long and up to 200 metres deep.

Since 1889 the gorge has been open to the public and nowadays a fully accessible walkway runs along the bottom of the cliff wall. It is a one of a kind experience to walk through this gorge.

(Entry ticket for an adult costs CHF 8 and for children between 6-16 costs CHF 5. (Children below 6 years can enter freely)).

I must say this was one of my best birthdays ever. I got to spend time with my family and finally got the chance to pay my tribute to the great legends of all time. Thanks Mike!

Hey everybody, I'm Madhurya, known as 'Maddy' or 'Madhi' to near and dear ones. I love to read, crochet, travel, decorate our home and ride my bike. I live in Switzerland with the love of my life, my husband Mike, and work as a Regional Sales Engineer in a multinational company. With "thesefleetingdays" I wish to share our travel stories, my art projects and our everyday life. I hope you join us on this journey. View all posts by Madhurya