For our honeymoon, Mike and I went on a week-long trip to Gran Canaria, one of Spain’s Canary Islands in the Atlantic Ocean. We booked an early morning flight on a Saturday; Our sweet brother-in-law insisted upon dropping us off at the airport.

The 4 hour flight became even more exciting as I read this book!

After collecting our baggage, we went to the car-rental to pick our car-  A Volkswagen Beetle convertible!!! I was thrilled! It wasn’t too expensive, about 300 Euros for the whole week, including the insurance. 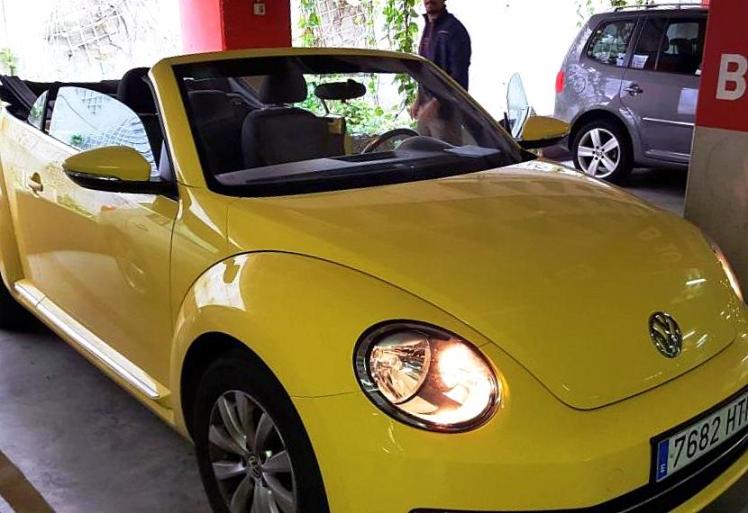 The weather was good, around 25°C. It was a welcome relief from the cold weather in Switzerland. With the hood of the car down, we drove from the airport to our hotel in Playa del Inglés. Mike had booked a 5-star hotel, Bohemia Suites & Spa for our vacation and it was lovely! We were greeted with glasses of Prosecco (an Italian White Wine) from the staff as we waited for the receptionist to complete the formalities. The interior of the hotel was classy, with shades of pink and purple everywhere! 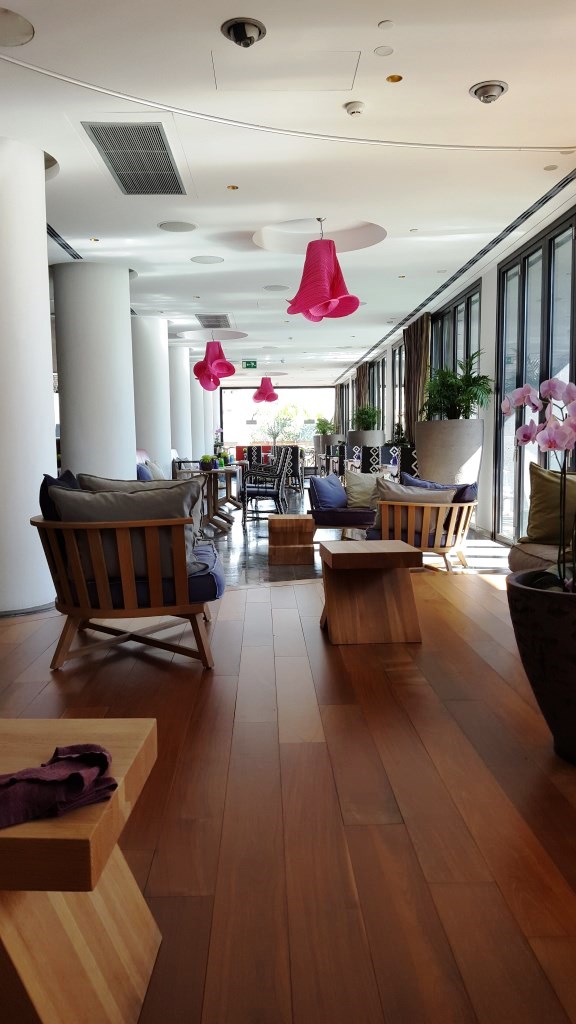 We’d arrived earlier than the estimated time, and our room was not ready yet. So we decided to explore the city.The Playa del Inglés beach is close to the hotel. We took a stroll along the beach, enjoying the stunning views of the dunes and the sea. It was quite warm by now and we were very hungry. We tried Spanish omelets at a restaurant along the coast which tasted nice and different.

Back at the hotel, we were taken to our room. It had a modern decor with all the amenities and a view of the beach to boot! In the evening we drove to a town located in the south-west region of Gran Canaria called Puerto Rico, which has a beach with a ton of hotels and apartments on surrounding cliffs.

After Puerto Rico, we drove to Maspalomas, a small town south of the island. It felt like I was in Florida or Dubai. Apart from the usual hotels and branded stores, there’s a 56 meters high lighthouse, named El Faro de Maspalomas at the end point. We ended our first day watching the sunset at Maspalomas.

Our stay included complementary breakfast at Restaurant 360°. It is located at the rooftop of the hotel and offers beautiful views of the sea. I looked forward to dining there every morning.

When in Spain, one must never forget to try the Café con leche, a really hot, strong and delicious Coffee! We loved it and so would you, I’m sure!

Weather forecast suggested that there was going to be a storm in the northern part, so we decided to stay south. We visited another town in the south-western part of Gran Canaria called Mogán. Mogan has a beautiful beach and a huge harbor which is a major stop for yachts travelling from the Atlantic to the Caribbean. The canals and bridges of its seawater inlet have earned it the nickname “Little Venice.” Along the marina, you’ll find an assortment of restaurants and bars, and pretty Mediterranean homes and cottages. 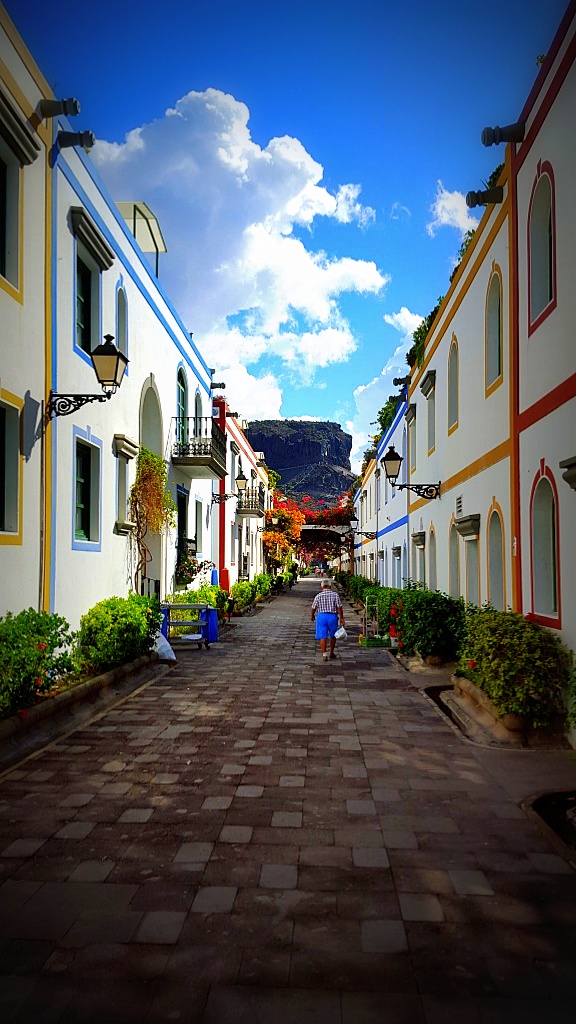 From Mogan, we drove towards La Aldea de San Nicolas , with old houses made of stone and mud from the 17th and 18th centuries. We passed beautiful landscapes as we drove: Mountains covered with plants like Aloe Vera, Cacti of various sizes and types, and vast blue sea.

On our way to San Nicolas

After lunch at an authentic Spanish Restaurant, we went to Cactualdea Park. As the name suggests, this park displays a wide variety of cacti; More than 1200 species can be found here. Some have been brought from places like Madagascar, Bolivia, Mexico, and Guatemala. The park is huge; It reminded me of Arizona, especially, Tuscon where my sister and her family lived before moving back to India. (An entry into the Cactualdea Park costs 6 Euros per person) 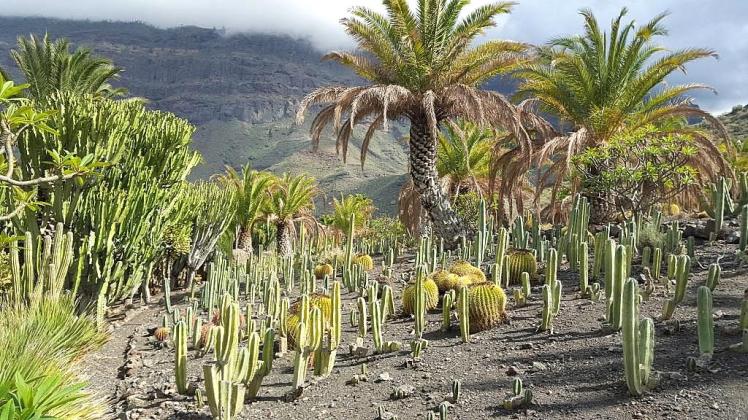 On day 3, we visited the Palmitos Park, another botanical garden located in Maspalomas. This one has a wide range of exotic birds, especially parrots brought from Central and Latin America, monkeys, crocodiles, a Komodo dragon brought in from Brazil and more. Folks here conduct a parrot show, exotic bird show, and the park`s highlight – the Dolphin show. I highly recommend visiting this park if you are in Gran Canaria. (Entry costs 30 Euros per person).

Weather promised to be nice and sunny on our 4th day and so we decided to explore the northern part of the island. Las Palmas, the capital of Gran Canaria, has an impressive infrastructure of hotels and apartments and its Port receives ships from all over the world. We walked around Triana, one of the oldest districts in Las Palmas and, now, its commercial center. It was just like any other bustling city and we weren’t too impressed with it!

The next day we went to see the Roque Nublo (Cloudy rock), located in the central part of the island in Tejeda. It dates back to the period between 5.3 and 5.4 million years ago, when a gigantic volcano erupted through the epicenter of the island forming this famous landmark.

It is about 67 meter high and is located on an elevated platform. A 1.5 km trek takes the visitor from the parking area to the rock. We tried our best to cover the rocky, semi-challenging ascent, but when I couldn’t push myself any further, we had to return. I wasn’t too disappointed; I still got to view and enjoy the “Pillar of Heaven” (as it was called by the indigenous people of the Island). Moreover, I experienced a different kind of adventure the next day that made me feel so proud of myself! Read about it in my next post….

5 thoughts on “A Honeymoon in Gran Canaria”