It was our second month anniversary. We decided to spend the weekend on our boat. The weather forecast said it was going to be sunny with no signs of rain or storm. Perfect!

Now before I tell you about our trip, let me just share a few details about this boat which is one of the most important things in my husband`s life..after me, I hope!!!

We have a US made Stingray 200CX motorboat originally made in 1998. Mike bought it second-hand in 2007 for a very good price.

The boat or “MYone”, as my husband fondly named it (obviously before he met me), has a strong Volvo Penta 105 HP Turbo Diesel Engine. This Engine can reach a speed of 52 km/h (which is quite fast in terms of water transport) and only requires about 6-7 liter Diesel per hour. 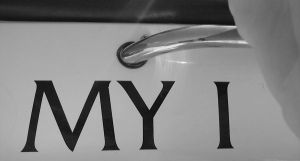 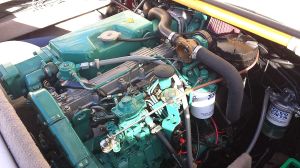 The power of the engine is transferred to the Sterndrive “Z” Gear, that drives the propeller for the forward or backward motion. The meter “Trim”, on the Instrument Panel shows the position of the Z-Gear. This gear also secures the boat from hitting the ground in shallow water,

“Tachometer” shows the RPM of the engine.

“Fishfinder” helps fishermen locate fish and also provides information like water temperature and the level of water beneath the keel of the boat (so that it doesn’t get stuck in the ground when the water isn’t deep). 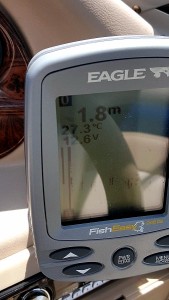 The panel has Oil pressure and Cooling water temperature display too,

Inside the boat towards the front, there is a large cabin which has a bed, storage compartments for life-vests, fire extinguisher and other Nautical equipment. It has a small pantry and a tiny toilet, “Porta Potti”. Two adults and one child can easily sleep in this cabin. 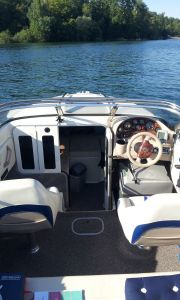 Mike has stored most of our necessities in our boat like a small gas stove, blankets, bottles of water ( in a storage box), refrigerator, towels etc. There is also a portable dining table that can double up as a cooking table. 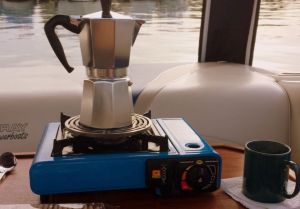 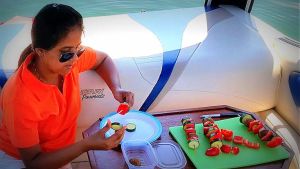 We’ve docked our boat in a harbor called Mammern, located in the lower part of lake Konstanz, (which is also a private camping place), almost 30 km away from our home (a 25 min car-ride) 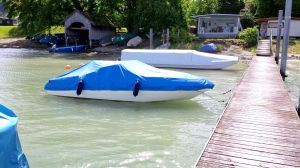 Coming back to our trip, we decided to spend the weekend in Kreuzlingen. Kreuzlingen is a small town in the canton of Thurgau (one of the 26 cantons/ sub-divisions in Switzerland). It is located on the upper part of Lake Constance/ Konstanz  bordering the city of Konstanz in Germany. It is a 1.5 hour ride from Mammern by boat. 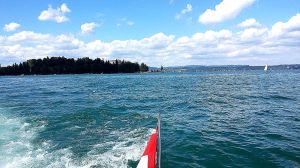 We reached Kreuzlingen at around 12.30 pm. It needs skill to steer the boat with precision and at the right speed so that it doesn’t hit the platform or the other boats around while docking. We were given a place to dock the boat by a Hafenmeister (Harbor Manager), after we paid a 15 Euros per night. It was around 1pm, by the time we finished all the work. We were exhausted by then.

Delicious homemade burgers prepared by Mike perked us up.

After we surveyed the harbor for washrooms and shower rooms, we decided to walk to the city of Konstanz, which is about 20 minutes from Kreuzlingen harbor. Stunning views of the lake and the shore enthralled us as we walked. Kids and young girls and boys and old couples were lying on the grass along the shore, relaxing and sun-bathing.

It was around 40°C and we were soaking wet by the time we reached the city.

Konstanz is one of my favorite cities because of the busy streets, shopping arenas and the buzzing crowd, which always reminds me of Dubai, the city I miss the most. 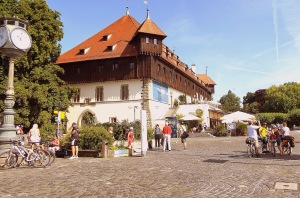 We walked a bit, checked a few stores around and went inside a shopping mall called Lago.

After having a nice cup of coffee at a cafe, we decided to go back to the harbor and relax.

Mike wanted to take a dip in the water, while I wanted to just relax on the shore and read a book. Our plans changed by the time we reached the harbor; We just laid on the grass and watched the crowd.

For our anniversary, we decided to have a special dinner at a garden restaurant next to the harbor called Fischerhaus. It got cooler and breezier in the evening. We had some delicious Swiss food beside the lake. 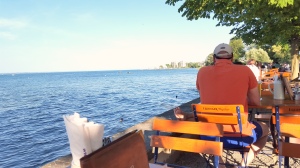 As the day ended, we retired to our boat and got ready to sleep. We watched a sci-fi movie, I-robot, on Mike`s portable DVD player.

After a good night’s sleep, we were woken up by the noisy ducks on the lake. It was yet another beautiful day promising more sunshine. After warming ourselves up with coffee and some bread with Nutella, we left this beautiful place and rode back home. 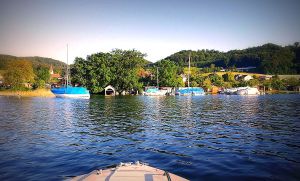 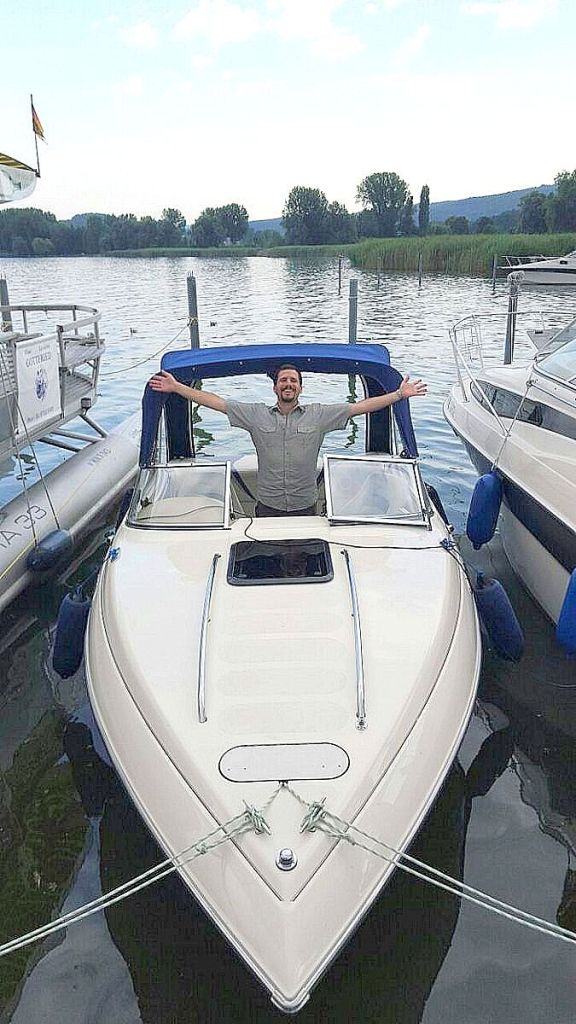 (Details of the boat and pictures by Mike)