I am very fond of wraps- Greek Pita wrap, Veggie Burrito, or a Frankie . Even a simple Chapati slathered with spoonfuls of Mixed Fruit Jam and rolled up, is a personal favorite. But what makes a wrap, or any entree for that matter, interesting to me is all the ingredients with different textures that it holds within- from the gooey dressing to the meatier Mushroom or Paneer. I’m always looking for recipes online that incorporate a variety of textures. On one such exploration I found a recipe for the Ultimate Paneer Wrap.

I made the Multipurpose Marinade first.

It came out tangy and spicy, just how I wanted it to taste. I kept some marinade aside, assuming it was more than what I needed. I cut up a block of Paneer into strips and submerged them in the rest of the marinade. Into the refrigerator went the bowl.

I prepared the dressing according to the recipe, by grinding a handful of Cilantro, a Green Chili, juice squeezed from half a lemon and a sprinkle of salt. But instead of mixing the ground paste with Sour Cream, which I didn’t have at hand, I used homemade Yogurt instead. I should have run the Yogurt through a sieve, to let the Whey out, as it made the mixture too runny, instead of the creamy texture I was looking for in a dressing.

I had half a Yellow Capsicum, half a Green Capsicum and a half of Yellow Zucchini, leftovers from when I made a Slow cooker Enchilada Quinoa Bake. I used them along with a big bulb of Onion to prepare my Vegetable filling. (By the way, I also added a spoon of Curry Powder into this mix. I always do, when I’m preparing a new dish, like Pasta or Fajita, to make it more appealing to my in-laws, who prefer the Indian touch to any dish.). 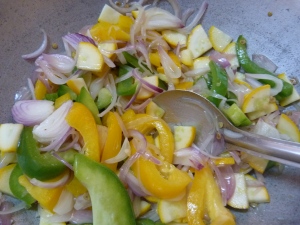 In order to add more body to the wrap, I cut a few Potatoes into strips and deep-fried them. Right after I scooped them out of the pan, all yellow and hot, I made sure I sprinkled some salt on them.

By now, the Paneer had had enough time marinading in the, what else but, Multipurpose Marinade. I shallow-fried the strips to caramelize a side or two. Paneer, when fried, came out a bit rubbery. My mother-in-law suggested I try using the Marinade-coated Paneer in my wrap as they are, instead of frying them, as the recipe suggests. She told me hers tasted better, without the frying.

While preparing the dough for Chapati, my mother-in-law added some Maida (All-purpose flour) to the Whole Wheat flour. I prepared a thin Chapati, placed a big spoon of the Vegetable filling, topped the filling with strips of Paneer and Potatoes, poured the dressing over. To make the Wrap even spicier, I spooned in a bit of the Marinade I had set aside, and rolled it up. The crunchy Veggies, crispy Potatoes and Spicy Paneer along with the sharp taste of the Marinade, made sure every bite felt like a riot of textures and flavors. We LOVED it!

Not the kids though, they found it spicy. So I made them both a wrap with some Potatoes and Tomato Ketchup. They LOVED theirs! Thanks to showmethecurry.com, we had one finger-licking good dinner!

4 thoughts on “How I prepared a Paneer Wrap”