“Slow and Steady!“, I kept telling myself, as I climbed the steps to reach Tirumala, the abode of Lord Venkateshwara. It was my first time; I had always driven with my family by car or bus and had never taken the pedestrian path up the hills. I tried not to think of the 3550 steps before me but chose to focus on the one step in front. One step at a time! Slow and Steady! One step at a time!…

That’s what kept ringing in my ears as it got steep and difficult to climb.

I had joined Prasad on this difficult journey on a whim. He had long planned to do the hike all by himself as he felt I wasn’t physically fit to climb. Prasad plays Tennis, does weight training and elliptical and even walks with me every morning, while I only do the morning walk. It had been long since I’d climbed or hiked last. But how could I let a personal challenge like that pass me by? Or let go of a chance to spend some quiet time with Prasad?

Our train had left Secunderabad around 6 in the evening and we reached Tirupathi early in the morning next day. The kids enjoyed walking the length and breadth of our compartment. Madhav was too excited to eat his dinner. So he felt hungry and fussy in the middle of the night. That, and the tiny berth we were cramped together in made it impossible to catch a wink of sleep. Medha- her sleep situation had scared us. She is someone who rolls all over the bed, so we worried she might fall from her berth. We asked if she would sleep with one of us. She wasn’t ready to. We tied a bed-sheet around the middle berth, placed thick blankets as logs beside her, and hoped for the best. She slept through the night without a mishap.

As soon as we got down, we went to a hotel right in front of the Railway Station to eat some breakfast. The food was hard to swallow, but swallow we did, a couple of idlis each, to stock up energy  for the climb.

We told Medha we’d be visiting a temple and if she wanted to, she could join us, but her ajja-dodda (Grandparents), who had accompanied us on the trip, would be going to the hotel to freshen up. She never passes up a chance to explore a hotel room, so she gladly went along with them. We had to sneak out of the cab at Alipiri, when Madhav wasn’t watching.

My legs protested just as I began climbing the first 1000 steps. My muscles cramped and I had difficulty breathing. I asked Prasad not to talk to me as that used up all the energy I had and kept me panting. Every 50 steps or so, I stopped to drink water and to catch a couple of deep breaths. Whenever I did that, I could feel a new wave of energy surging in, making the next few steps climbable. I never let myself sit and relax. I thought that would put my body under inertia and make it impossible to continue the journey afterwards. We kept on moving. 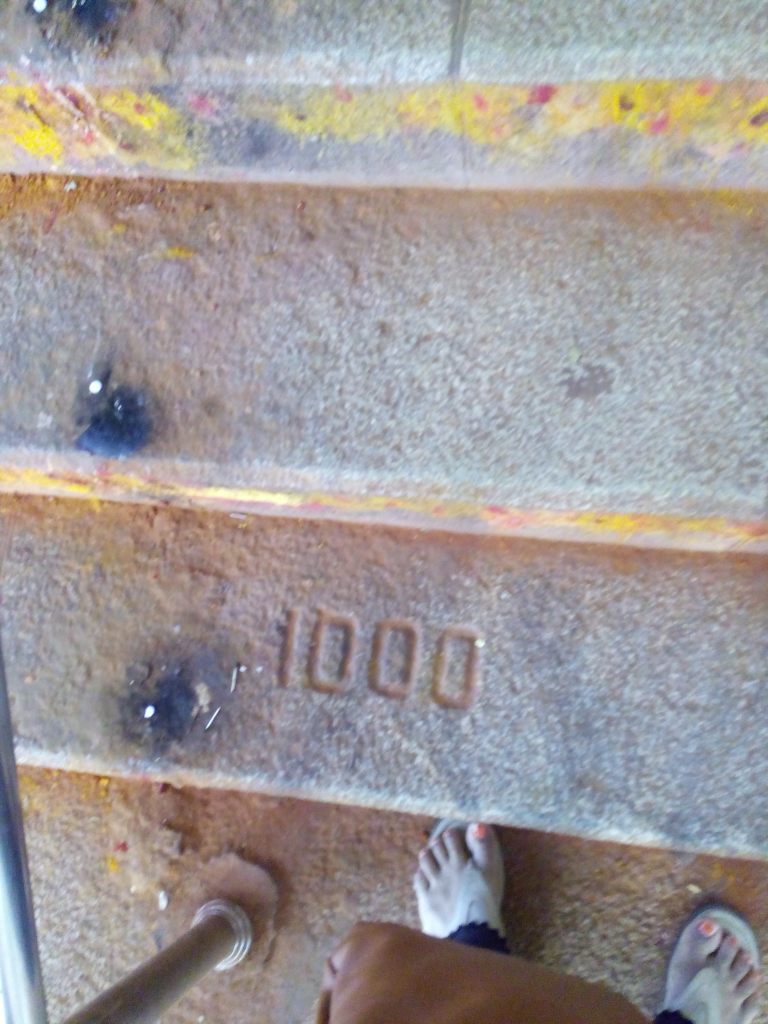 Prasad mumbled a Mantra, while I mutely watched the people around me, as they undertook this journey, and also wondered what effort and time must have gone into building the steps, in the beginning. The first pilgrims must have had it so hard. We now had a protective ceiling, railings to hold onto, comfortable seats, toilets, shops selling everything from water to Bhel Puri! I only had to look at the little kids or frail old folks making the climb just like me, to pull me out of exhaustion and self-pity

We were admonished by many for wearing chappals. We didn’t know it was a rule not to. Maybe we shouldn’t have, because many hadn’t. Many considered the steps sacred and lit camphor or smeared vermilion upon each step. Imagine having to bend down every few seconds! I pitied their poor backs! I also spotted a few devotees crawling up the steps. The things we do to appease god!

That’s OK,  but if we could use some of that will power to do something productive, this world would become a much better place…

About 2000 steps later, the climb leveled out and it was just a long stretch to walk on, through an arid jungle. At one point, we had to walk on the road, sharing it with oncoming vehicles. But the views of the mountains were stunning, for me to sulk about the inconvenience to the pedestrians. We spotted windmills, that instantly flooded us with memories of San Diego, our favorite holiday spot in the US. I kept expecting to see a Gopuram or a gigantic statue of the Lord to mark the end of our journey, but I found none, except, maybe, the gorgeous gigantic statue of Hanuman, along the way. 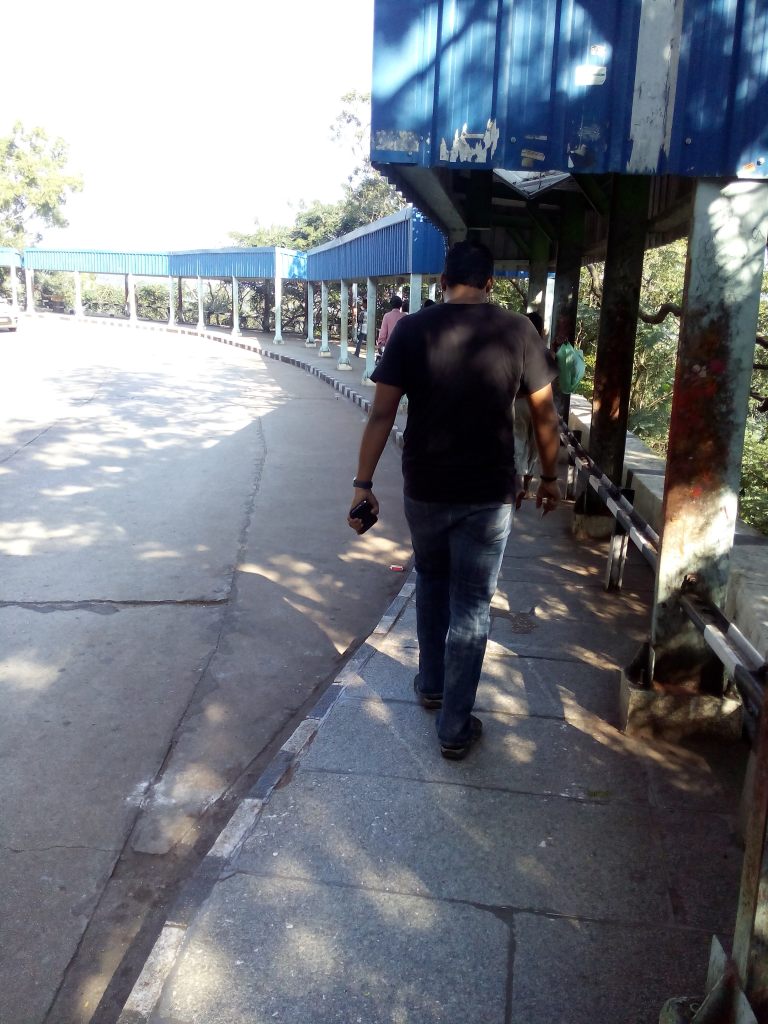 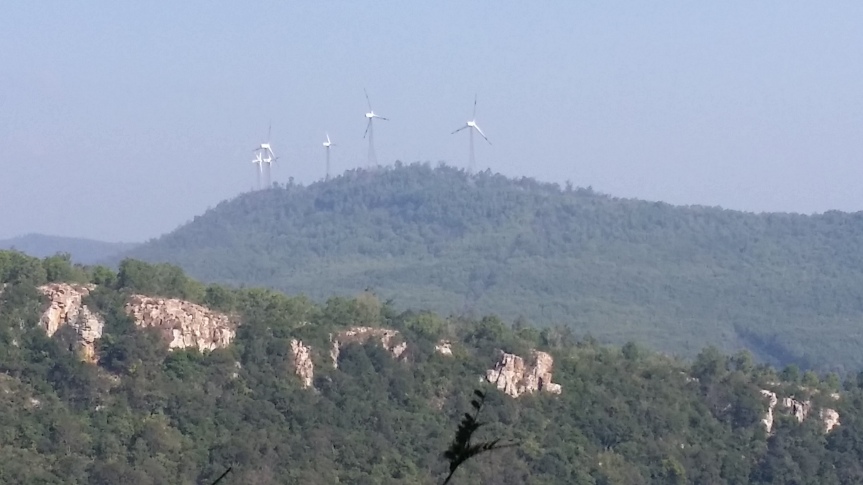 The last few steps were steep, but I was brimming with excitement with every step climbed – I had done it; I had FINISHed something hard that I set out to do; I had challenged myself and had emerged victorious. I was also brimming with gratitude towards the Lord Venkateshwara himself; Had he not blessed me with the energy, determination and the companionship of Prasad, it would’ve been impossible for me to accomplish my goal.

It didn’t matter that I was totally exhausted and sore by the end of the journey. And for the next couple of days too…

in 2 and a half hours

7 thoughts on “Tirupathi – the journey”