The famous Iron Horse Biking Championship was happening that weekend. So we had to share the roads with a horde of cyclists and spectators. Along winding hills towards the town of Telluride we drove at a snail’s pace which was a boon in a way.Had we breezed past we wouldn’t have been able to appreciate the emerald green lakes nestling in the midst of vast expanses of meadows. Beautiful horses in their shiny coats gathered by the fences to check what the bikers were upto.

Halfway through our ascent we realized we couldn’t drive any further. The narrow road ahead was closed until noon to make room for the bikers. So we turned back to Durango Downtown for a brunch at the Carver’s Brewing company where I had an Avocado Burrito that had spicy Salsa Verde drizzled all over it doubling its yummy factor.

Since we couldn’t get to Telluride by the US 550 called the “Million Dollar Highway”, we took the US-160 instead. Green hills and flat grasslands were dotted with cows and yellow Dandelions; the small towns of Mancos and Dolores en route looked inviting enough to make us stop for pictures. The drive was as good as any “million dollar highway” could be!

“Mountainfilm”, a film festival was happening in Telluride that weekend. Music, freebies and beautiful people hogged its streets. Since we weren’t going to hang around until 9pm to catch a free outdoor movie, we decided to do the next best thing- a gondola ride between Telluride and Mountain Village. For free! The 15 minute ride took us high through the canopy formed by Quaking Aspens and Engelmann Spruces and gave us stunning views of the town below. 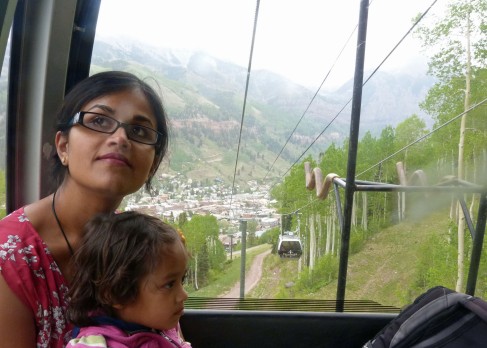 The resort town of Mountain Village had a cobble-stoned square with European-style buildings housing restaurants and eclectic stores. 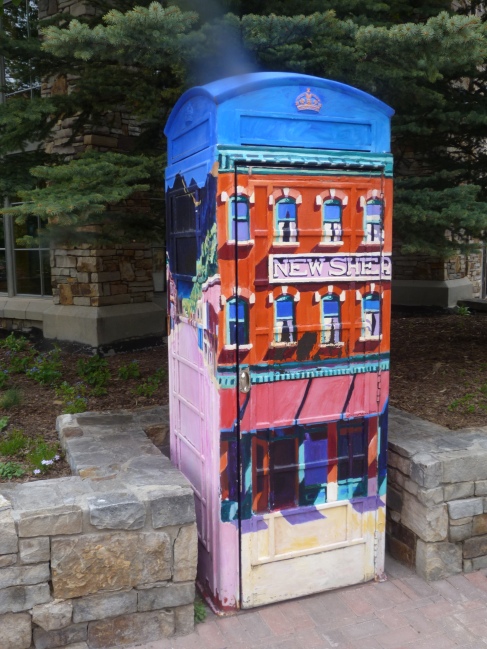 Our next stop was the town of Ouray, called “the gem of the Rockies”. We braved the pushy winds to walk around a town with stores whose names read like poetry: Skol studio Gallery, Goldbelt Bar and Grill, Timberline Deli and Sandwich factory, the Cutting Edge Family Hair care, Olde Tyme Portraits, Duckett’s market and Biergarten:Brews, Views and Food. I so wish the wind had let us spend more time there.It felt as if we were shoved down the steep road strewn with pebbles and loose sand as we headed to our car. By the end of our foray into Ouray I was getting paranoid, I could feel our car swaying with the heavy winds.

Our final stop that day was the colorful Silverton, a mining town. Mmmmm… That trip brings back memories of sipping large cups of coffee and just soaking in all the new sensations as the world hurried by.