This post is about our family trip to Durango and other mountain towns of Colorado last Memorial Day Weekend. I’ll divide our time in parts so as to make this easier and less-boring to read.

In order to make a 10 hr. drive manageable with a toddler, Prasad and I decided to stop at Pinetop, Arizona, for the night, before embarking on a 6hr journey to Durango the next day. Mammoth mountains surrounded us as we made our way towards Pinetop. Behind a veil of Cottonwoods and Quaking Aspens we caught glimpses of a stream gushing by. Prickly hot and arid Tucson wasn’t far behind but we had entered an oasis.

After a night in Pinetop we took the Az-77 state highway for the rest of our drive to Durango. Various shades of green on either side greeted us that misty morning. At Gallup’s “Cracker and Barrel” we had a breakfast of eggs, hash brown casserole and homemade biscuit with a generous spread of butter before getting onto the US-491 N. As we drove on, the land looked parched: grass by the highway looked dry and clumps of bushes attempted to soften the harsh landscape of New Mexico. I was beginning to look forward to the greener pastures of Colorado.

Entering Colorado felt like entering a world of postcards, each scene as or even more picturesque than the one we passed before. Barns with their aging fencing, beautiful lakes reflecting the greens of Pine trees and animals lazing around instead of being confined; We knew we had finally arrived! 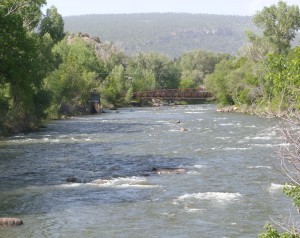 In Durango we chose to spend the evening beside the Animas River, whose water looked nothing like the dry Santa Cruz River of Tucson. It was swift, had more volume, soothed the ear with its whooshing sound and  seemed to hold cosmetic powers. The locals looked absolutely gorgeous as they sped by on their bikes and sailed the clear waters on rafts and canoes.

To wind down a warm windy evening of leisurely stroll alongside a river we headed to the Steamworks Brewing Company, a bustling bar and eatery known as the “town’s meeting place”. Our Steamworks experience deserves its own post. I’m sure Prasad will take the trouble of a trip to Durango just to relive the time we spent there.